The Story of the Nomoscope 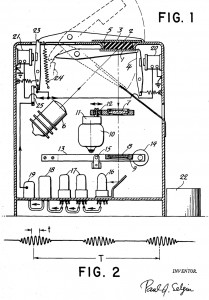 Patent No. 2,646,717: The Nomoscope. “Device for the Identification of Documents or Printed Matter,” aka the dollar bill changing machine.” At dinner parties my inventor papa would quip, “Yes, that’s right, I invented the first machine that gave change for a dollar bill and never got a nickel from it.”

The story of the ill-fated “Nomoscope” is told through a series of letters and affidavits to and from attorneys, and is much more complicated than my father’s glum one-line party quip suggests. In 1958, two years after moving to Bethel, Connecticut, through a man named Peter Treves (no relation to my father’s family, I’m told, though he pretended that there was), his business partner, an agreement was reached whereby the technology of my father’s invention was leased to the American Totalisator Company, which would mass-produce it.

Within a year of that agreement, suddenly dollar bill changing machines began popping up in train stations and airline terminals across the country—manufactured not by American Totalisator, but by two other firms: Universal Controls, Inc. and National Rejectors, Inc. There followed a rapid series of accusatory letters, claiming that Totalisator had, for a kickback, underhanded the technology to these other firms. In order to prove infringement, the machines had to be seized by court order, taken apart and examined by patent investigators.

The case dragged on for a half-dozen years, ending with no proof and a settlement of $10,000—barely enough to cover legal costs for my father and his partner—who, it turned out, had himself for a hefty sum underhanded my father’s invention to those two other companies. By the time he learned this, my father was so fed up with the whole megillah he refused to pursue it any further.

Vacationing in Venice during the summer of 2000, at a café I met Michael Philip Davis, an opera singer and director. He invited my then-wife Paulette and I over to his mother’s palazzo for drinks. His mother was the famous diva Regina Resnik. Her palazzo was on the Giudecca. When we arrived we were shown to the balcony, where two women were seated. One of the women was Valerie Heller, Catch-22 author Joseph Heller’s recent widow; the other introduced herself as Vivian Treves.

On hearing my name the second woman asked, “Your father wasn’t by any chance an inventor?” She was the daughter of Peter Treves, the man principally responsible for my father’s never getting a nickel from the Nomoscope, his dollar-bill changing invention.

Peter Selgin is the author of Drowning Lessons, winner of the 2007 Flannery O’Connor Award for Fiction, Life Goes to the Movies, a novel, two books on the craft of fiction, and several children’s books. His memoir, Confessions of a Left-Handed Man, was short-listed for the William Saroyan International Prize. His latest novel, The Water Master, won the William Faulkner Society Prize, selected by Random House Senior Editor Will Murphy. His work has won the Missouri Review Editors’ Prize, the Dana Award, six Best American Essay notable essay citations, and two selections for the Best American series. A second memoir, The Inventors, is forthcoming from Hawthorne Books in April of 2016. He teaches at Antioch University’s MFA program and is Assistant Professor of Creative Writing at Georgia College & State University.
View all posts by Peter Selgin →
This entry was posted in Dreaming on Paper. Bookmark the permalink.